Summer is fishing season in Aeternum. You can fish at any body of water, but what about your fishing pole, location, and bait? Learn the basics to catch bigger, rarer fish and quickly increase your fishing skill level. Fishing XP will be doubled each weekend throughout the Summer Medleyfaire Event. 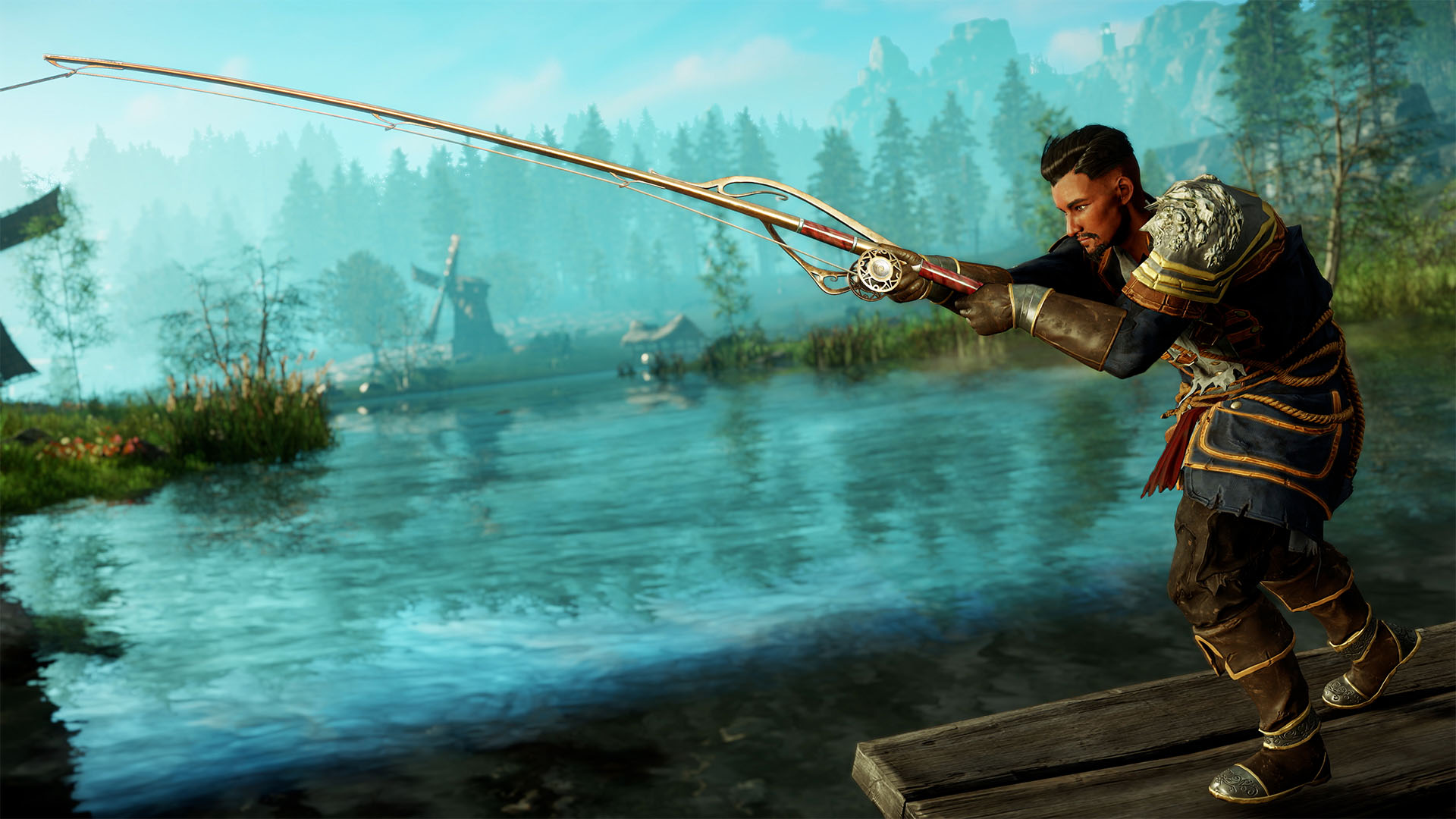 Fishing poles are tools used to catch fish. You can get one through crafting, trading posts, drops, and quest rewards. Like all tools, higher tier fishing poles have improved stats. For fishing poles that means better cast distance (increases from 12M on Tier I to 20M on Tier V), tension recovery (increases from 27.5 tension recovered per second for Tier I to 37.5 for Tier V), and odds of catching rare fish (125% higher fish rarity chance with Tier V). 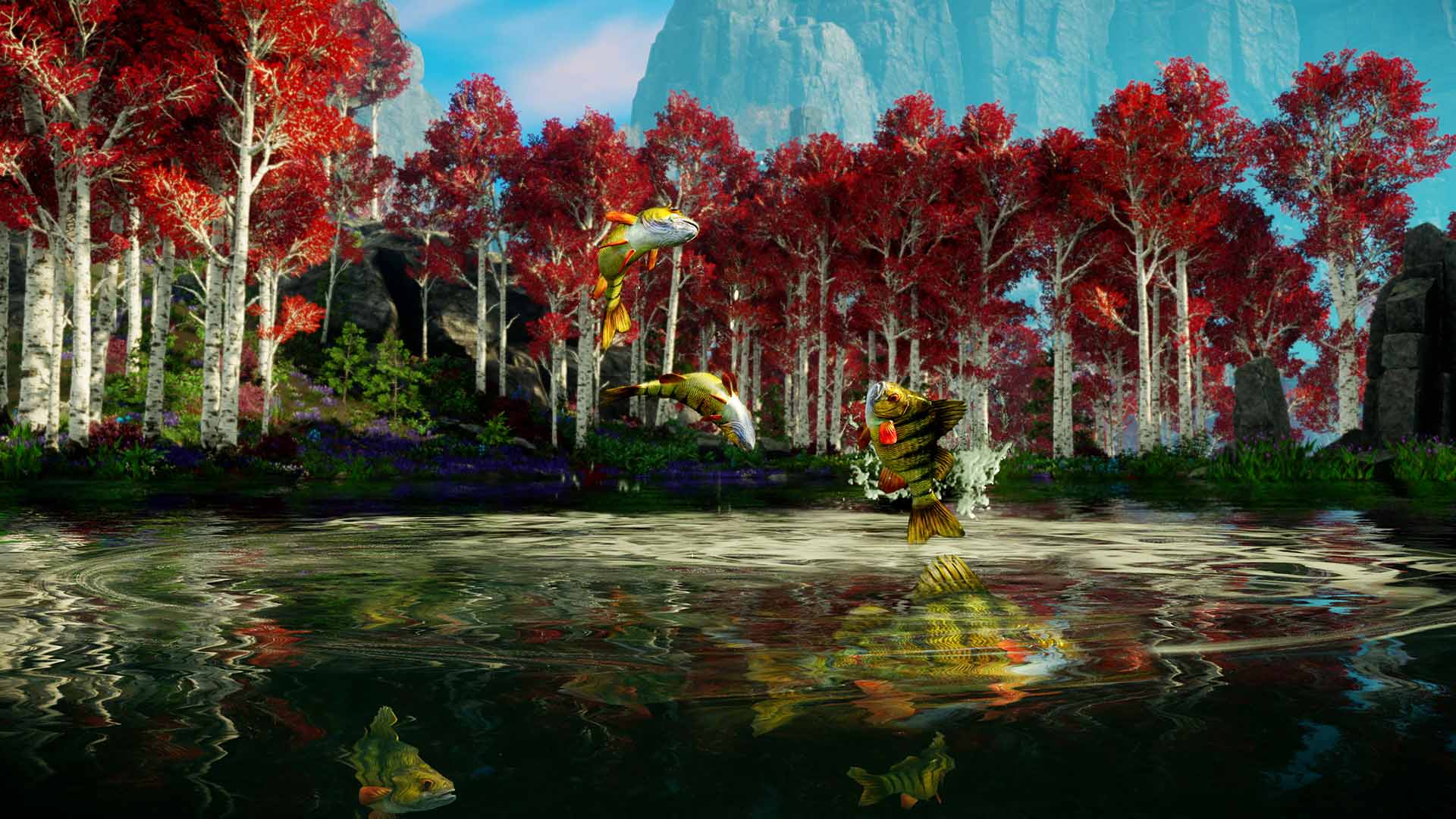 Fishing Hotspots are circular areas with ripples and jumping fish. Each one is designated as broad (1 star), rare (2 stars), or secret (3 stars). Higher rarities have less fish and longer respawn times, but far greater chances for you to walk away with rare and legendary catches. Fish vary by region (more on that below).

Hotspots either appear on your map or can be discovered as your fishing skill level increases. Trackable Hotspots look like yellow hexagons on the map, while discovered Hotspots are marked with a fish icon and their rarity.

Remember, if the game doesn’t say “Landed in Hotspot!” when fishing then you either missed or are in the wrong spot. Hotspots do not move from within those hexagons, so if nothing is there, someone may have recently used it. Check back later to take your improved chances at rare fish. 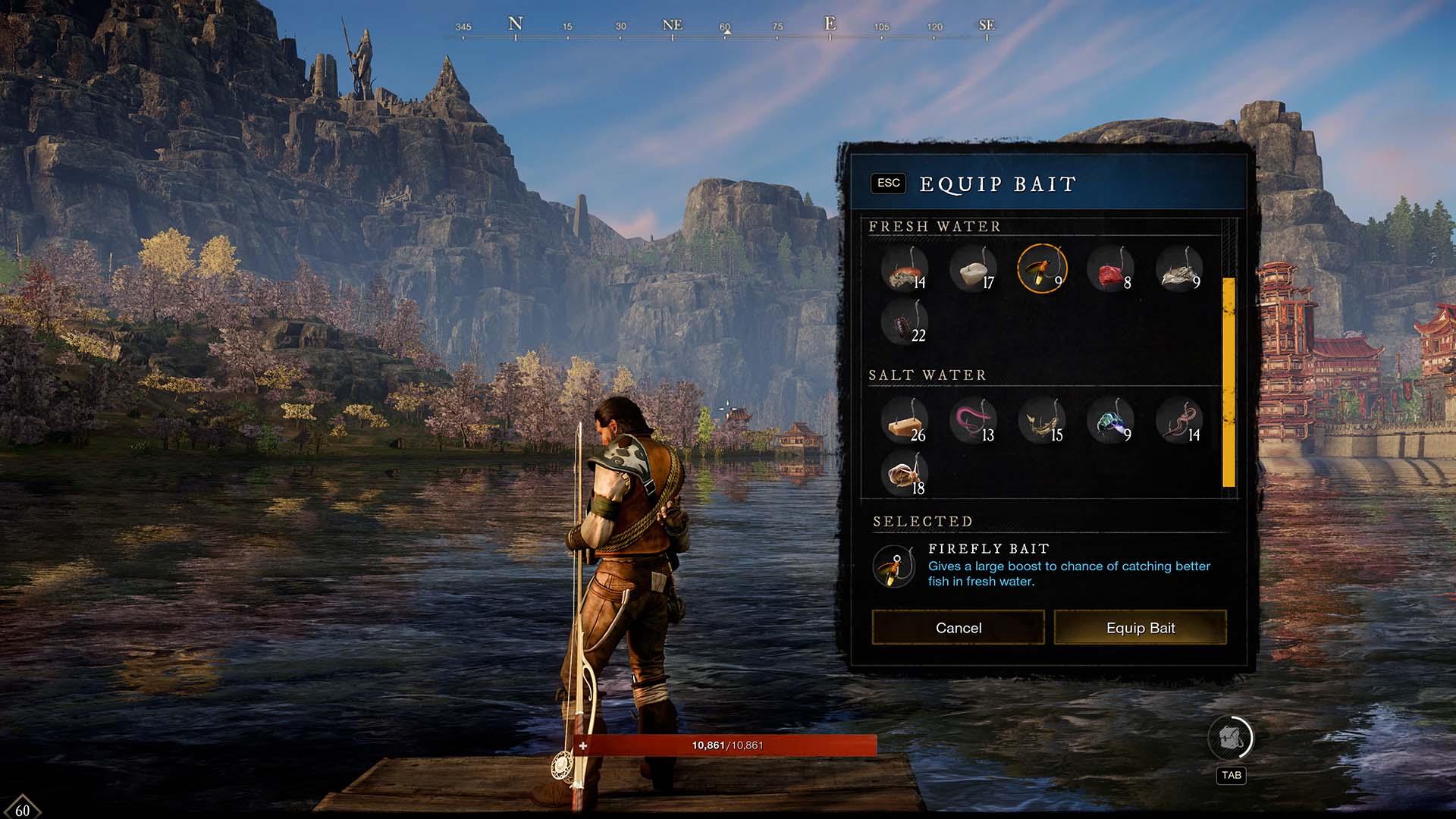 A fishing pole and a body of water are all you need to catch something. However, you’ll want to equip bait to catch fish in less time. There are two Freshwater and two Saltwater bait. One increases your chances of scoring a big fish, while the other improves your odds of snagging a rare fish. Remember to always equip bait (Press R to open the bait window) based on your location and desired catch. 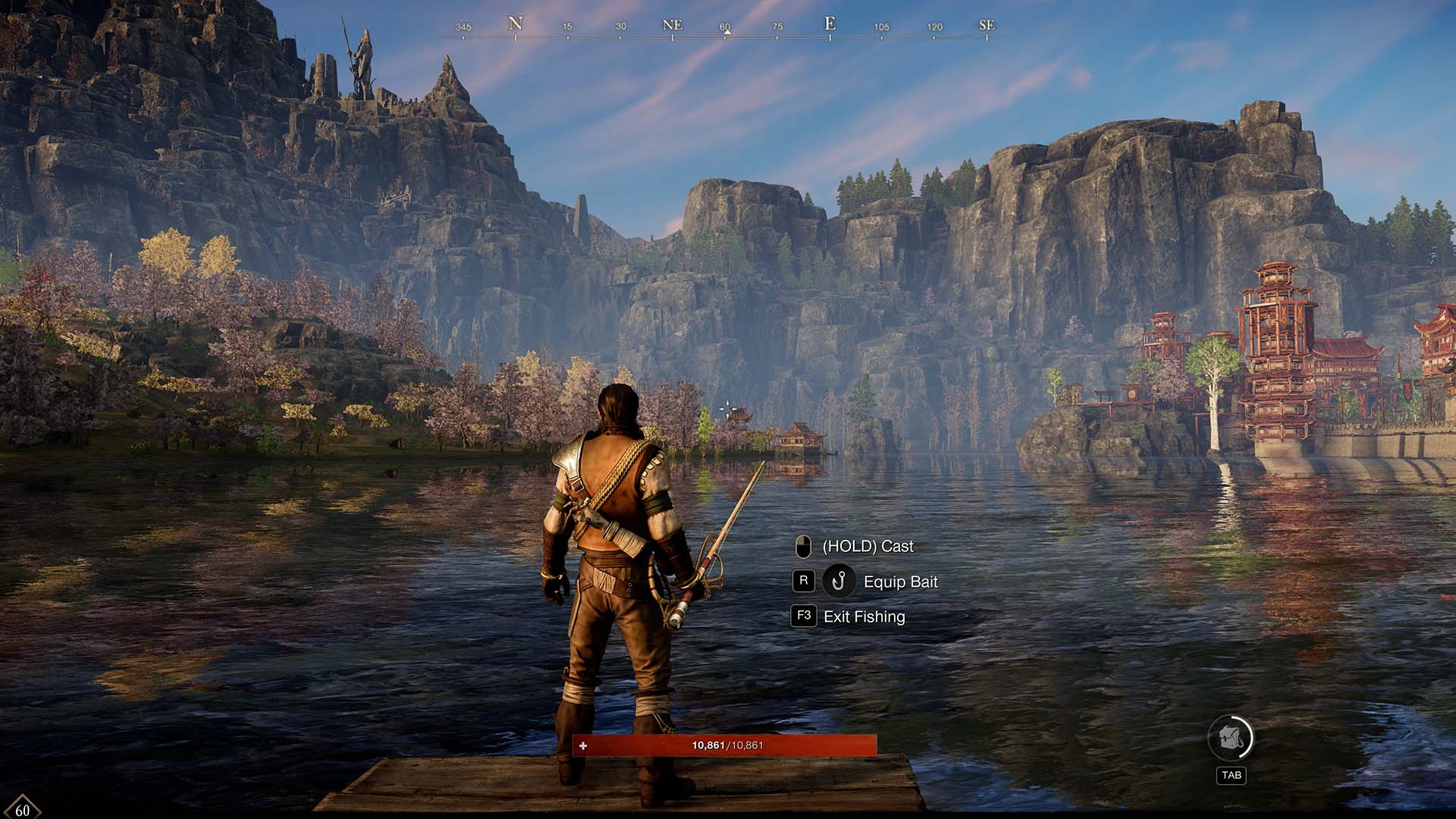 Once you’ve gotten a fishing pole, found the right spot, and prepared your bait, it’s time to score a catch. First, press F3 to enter Fishing Mode. You’ll notice a few options like Cast and Equip Bait. Next, press R to equip your bait based on the type of water and desired catch. Finally, hold the Left Mouse button to cast your bait.

A small circular indicator will appear on a vertical line when casting. Release the Left Mouse button when the circle is at the top of the line to maximize casting distance. The farther the distance, the easier it is to reel in a fish. 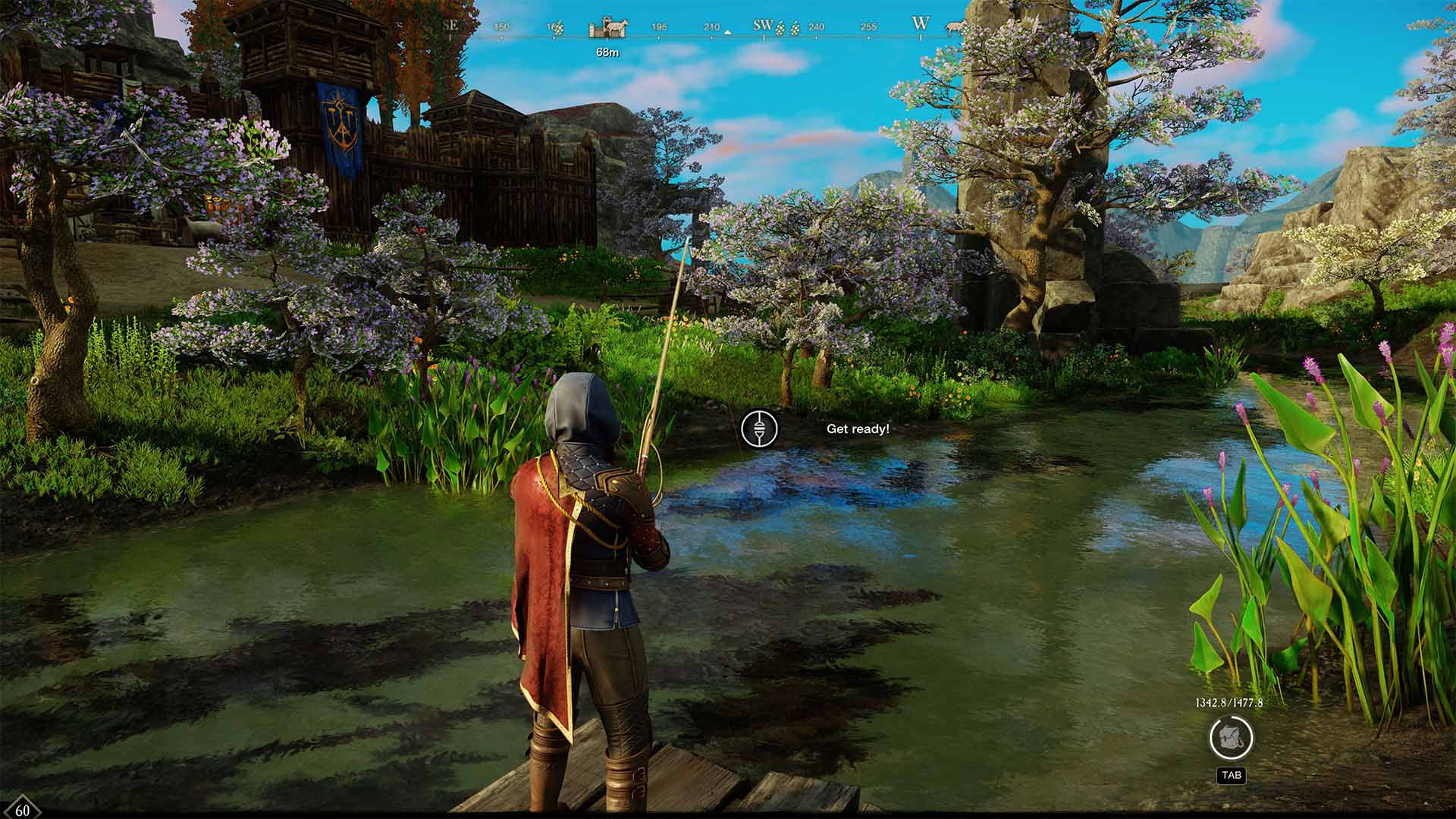 You’ll then have to wait for a bite. The deeper the water, the less time you’ll wait. Bait also greatly reduces wait time. Press the Left Mouse button as soon as the game says, “Hook!” to reach the last part ⁠— reeling it in. 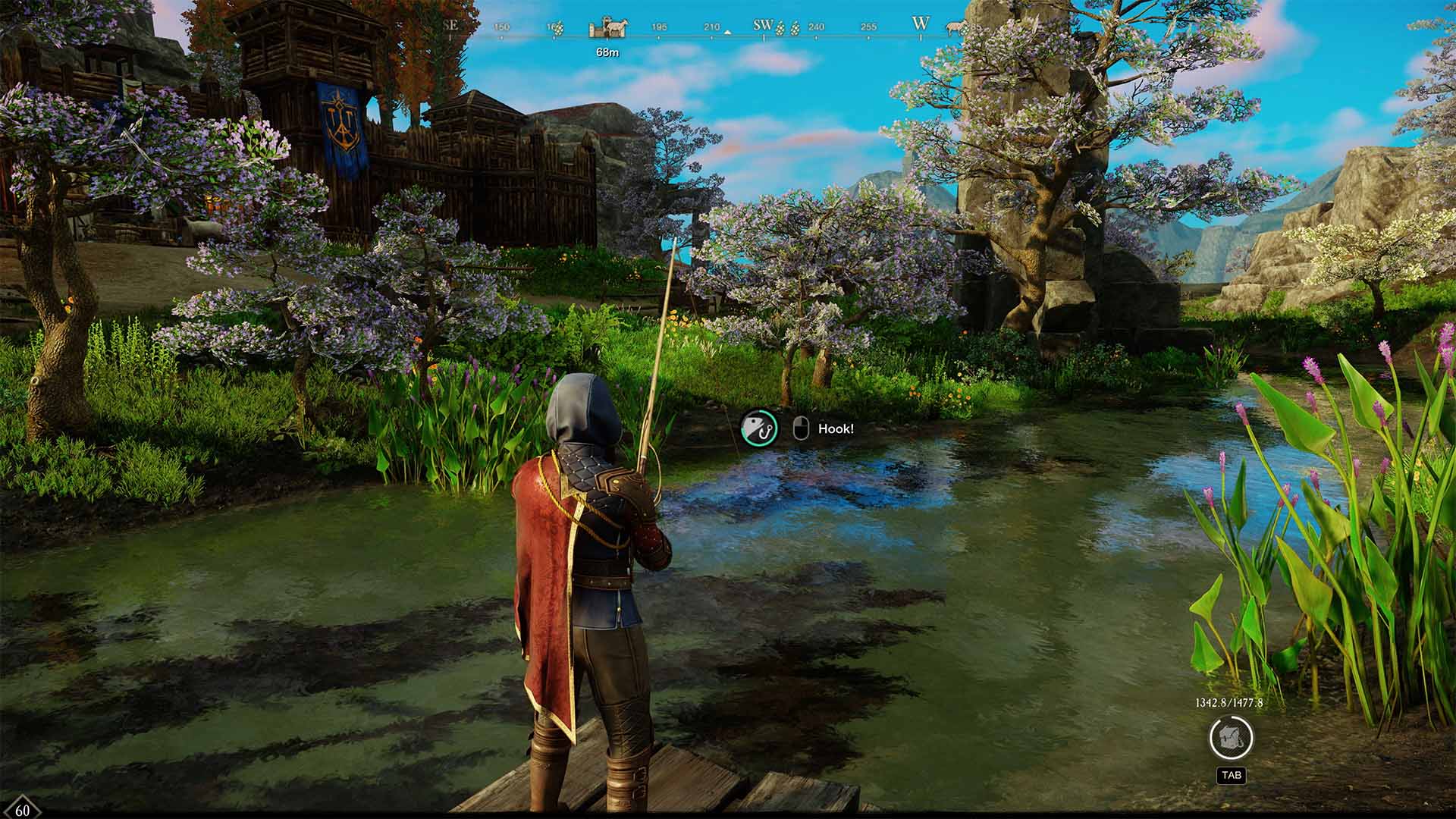 Hold and release the Left Mouse button at the right time to successfully nab a fish. The circular icon will grow and change from green to orange and then red. Consistently release the button when the icon turns orange for a faster catch. If you create too much tension and wait until the icon turns red, your line might break. Keep reeling until you’ve completely pulled in the fish. 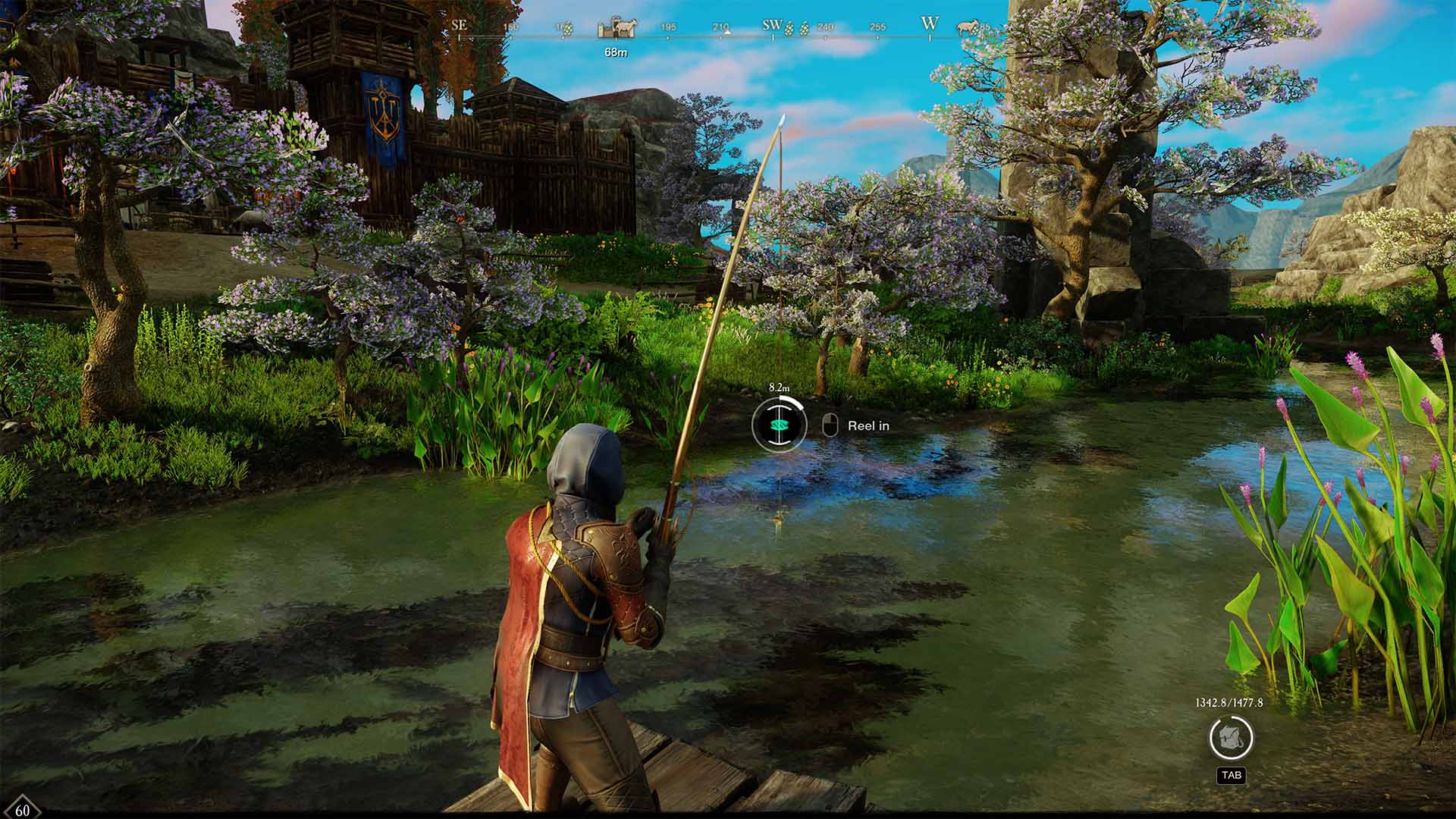 Mount-A-Catch stations are a new feature in the Summer Medleyfaire update. Visit one in any village to turn your favorite catches into sentimental decorations for your house. 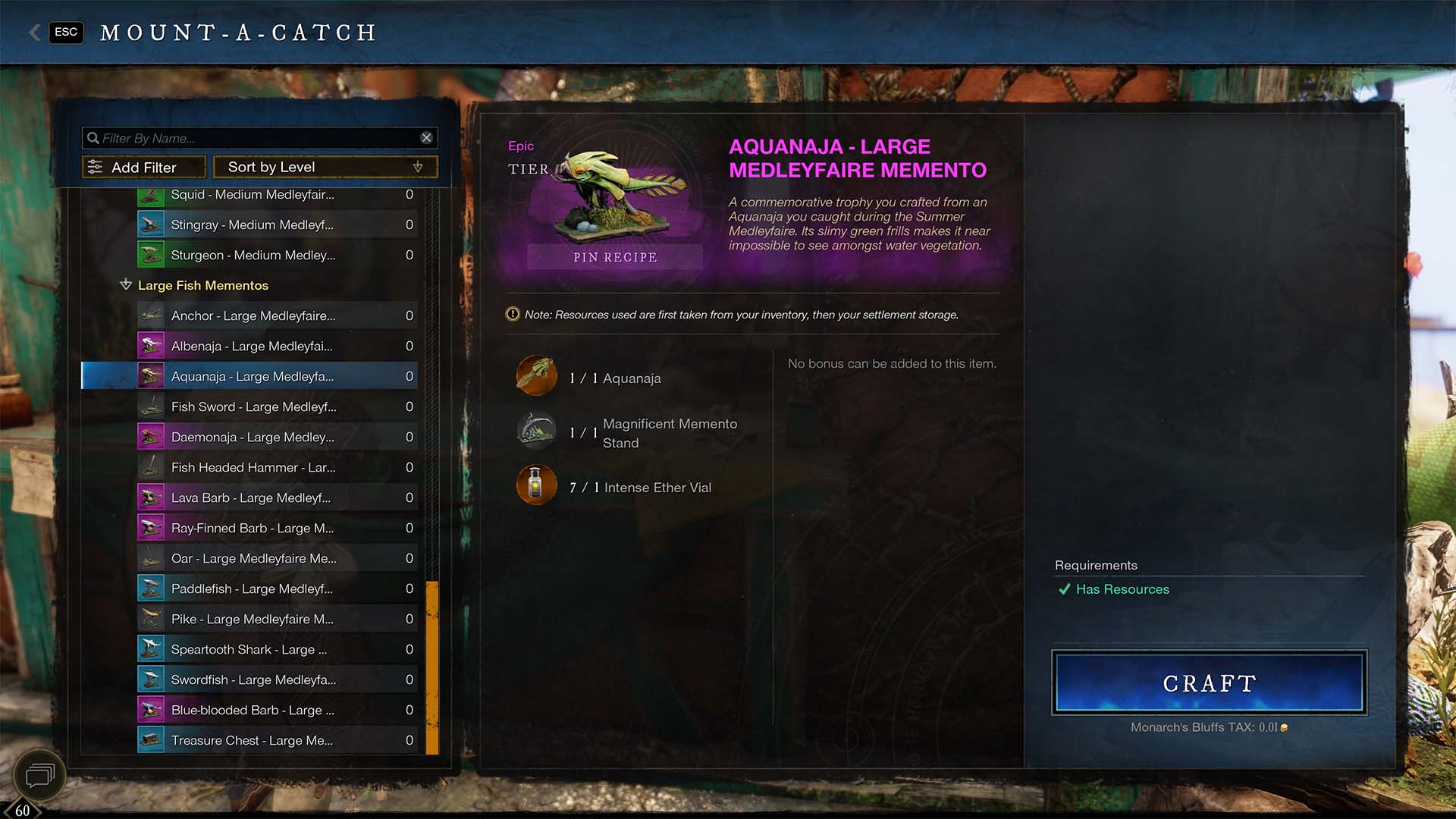 First, craft a Memento Stand with the following resources:

You can also make higher tier Memento Stands using more of each resource.

Next, to mount the fish, you’ll need whichever fish you want to mount, plus one of four types of Either Vials. Each Either Vial corresponds to a different rarity of fish, so make sure you purchase the correct one at the Summer Medleyfaire Shop. 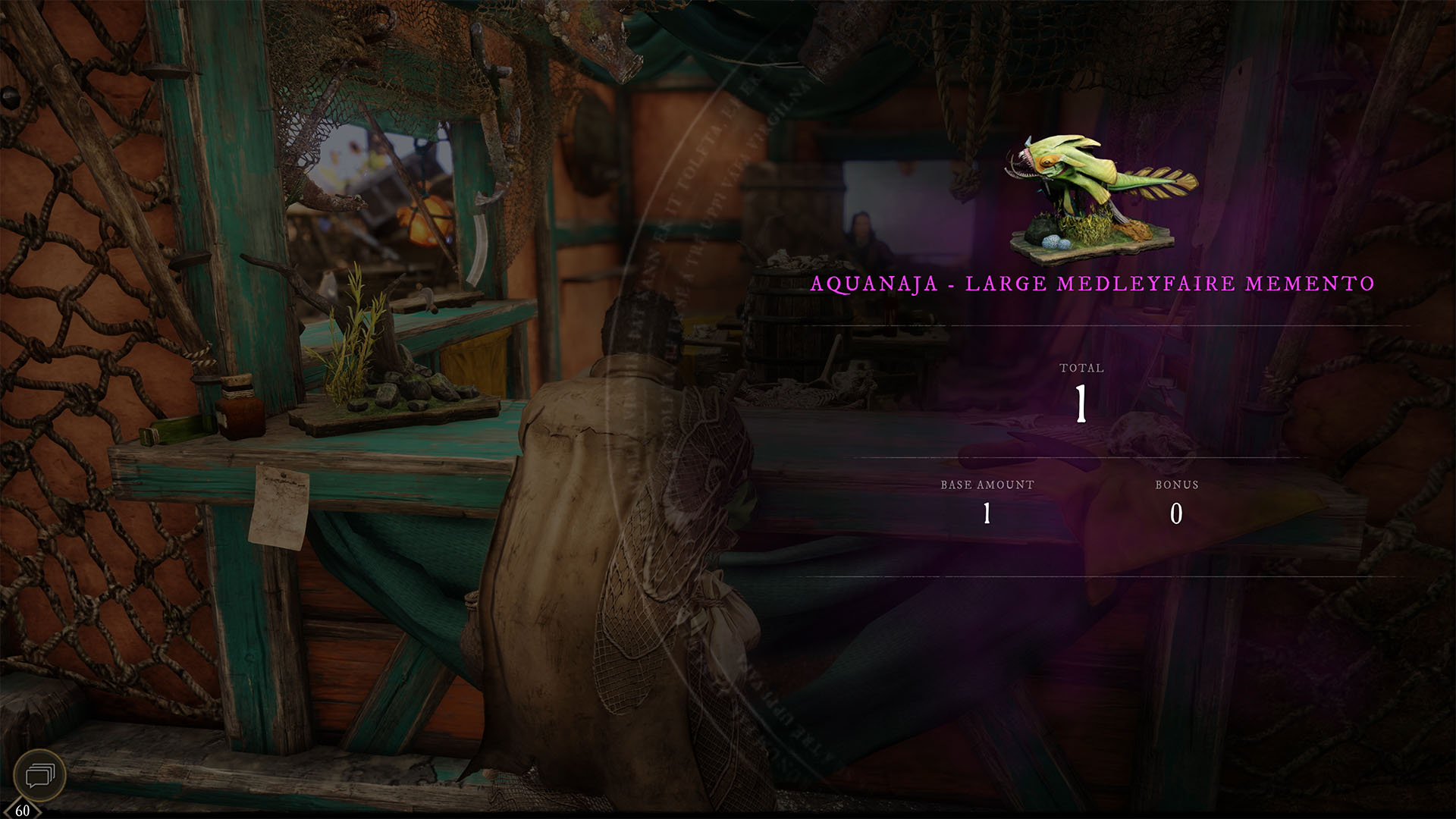 Use Maudlinbug Bait anywhere on the island or equip any bait at Aeternum Sturgeon Hotspots during the Summer Medleyfaire to catch Aeternum Sturgeons for event reputation and tokens. Tokens can be exchanged for rewards like housing items, instrument skins, armor skins, fishing pole skins, emotes, and more! 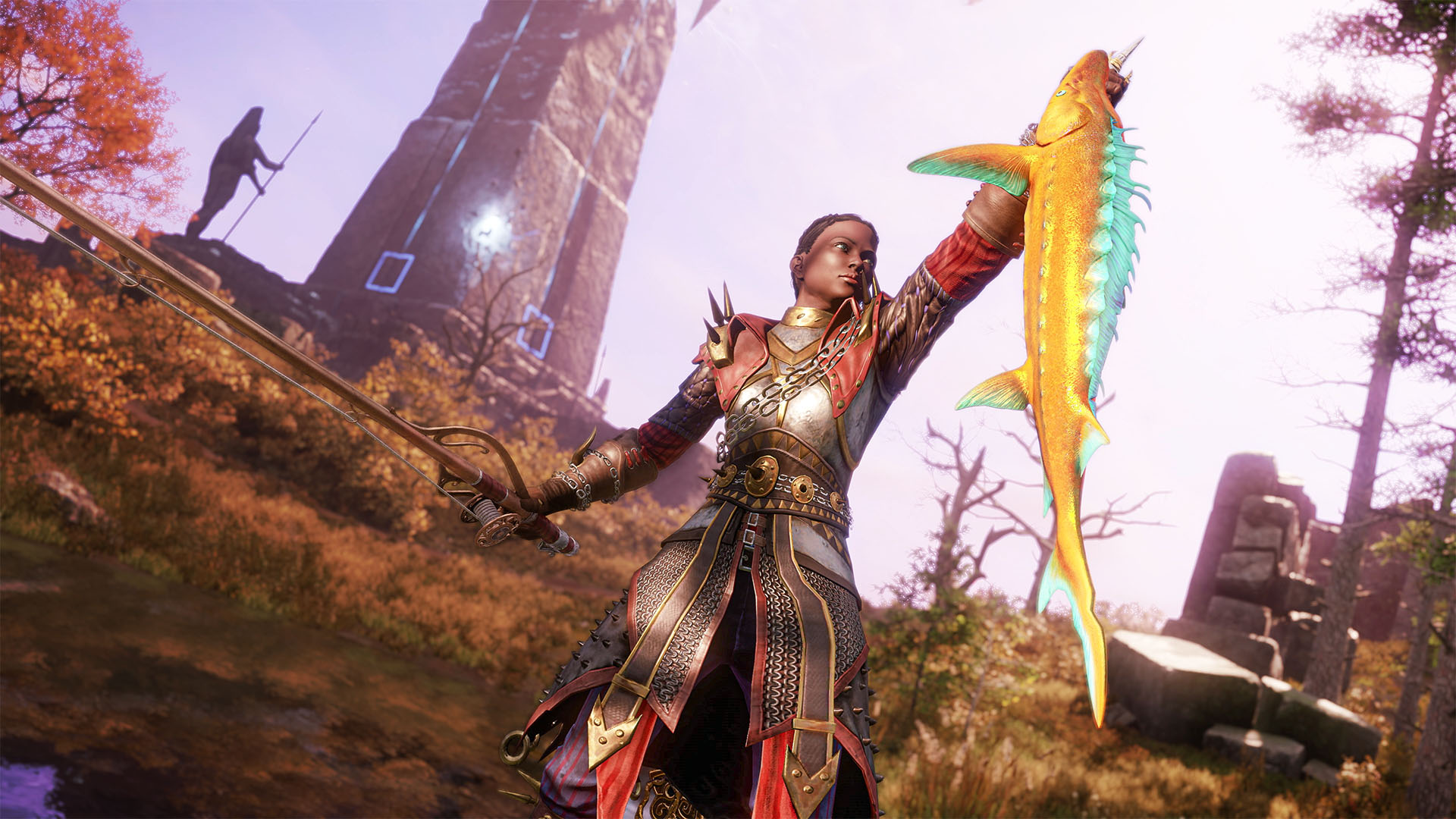 There is a 15 fishing-quest chain that rewards you with gear for a more successful fishing experience. Find Michael Shields just west of the Windsward Settlement to start the first quest.
These quests involve getting bait, catching fish, finding hotspots, and leveling up your fishing skill all over Aeternum. While you can start them at a very low character level, it’ll take some time to get your fishing level high enough to finish them all.

Complete the final quest in the chain (To Be a Grand Master) to earn a Legendary Pole Reward Box with one of four possible drops:

Every Fish in New World

Looking for a specific catch? Here’s a list of every fish in the game. 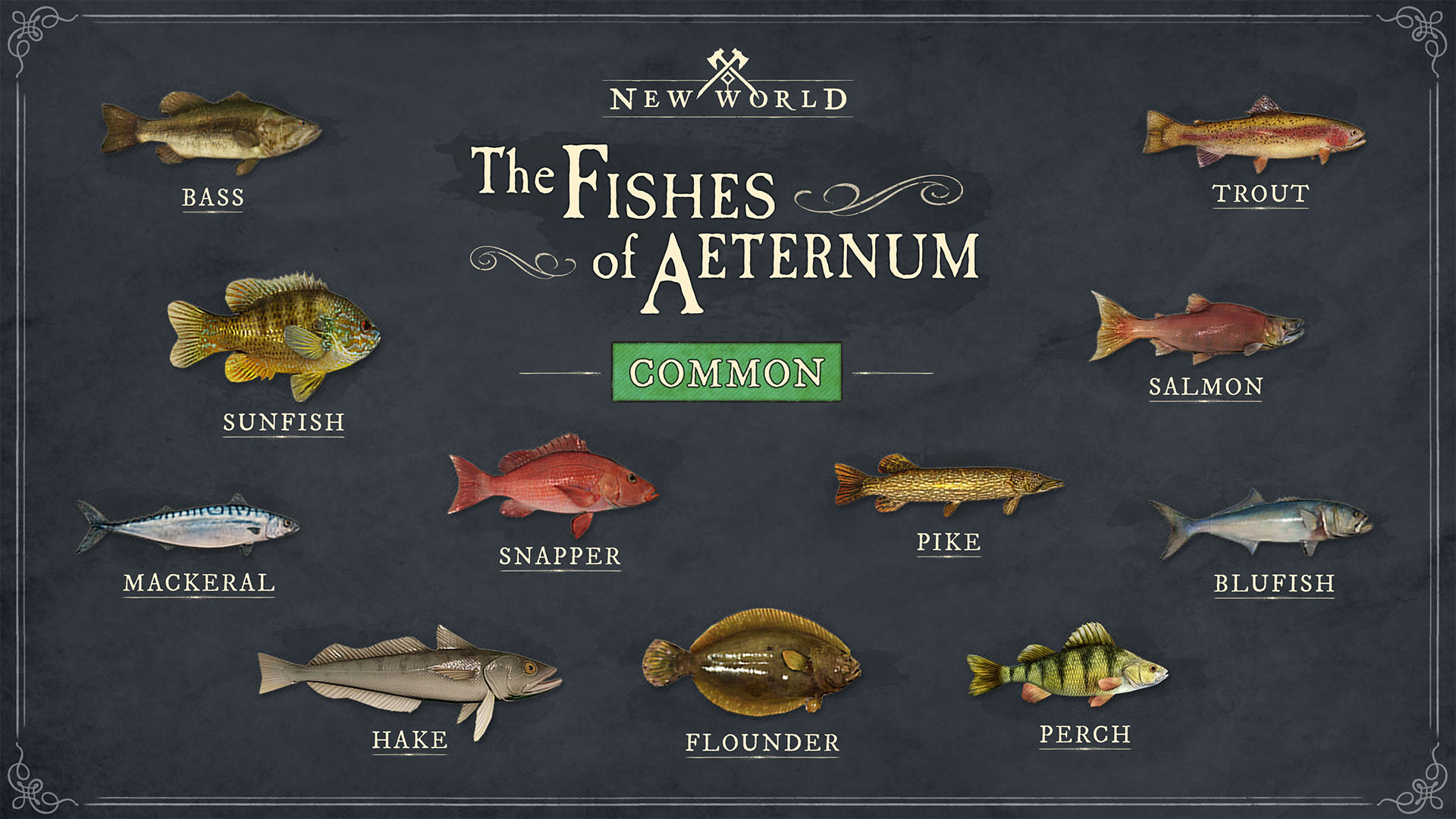 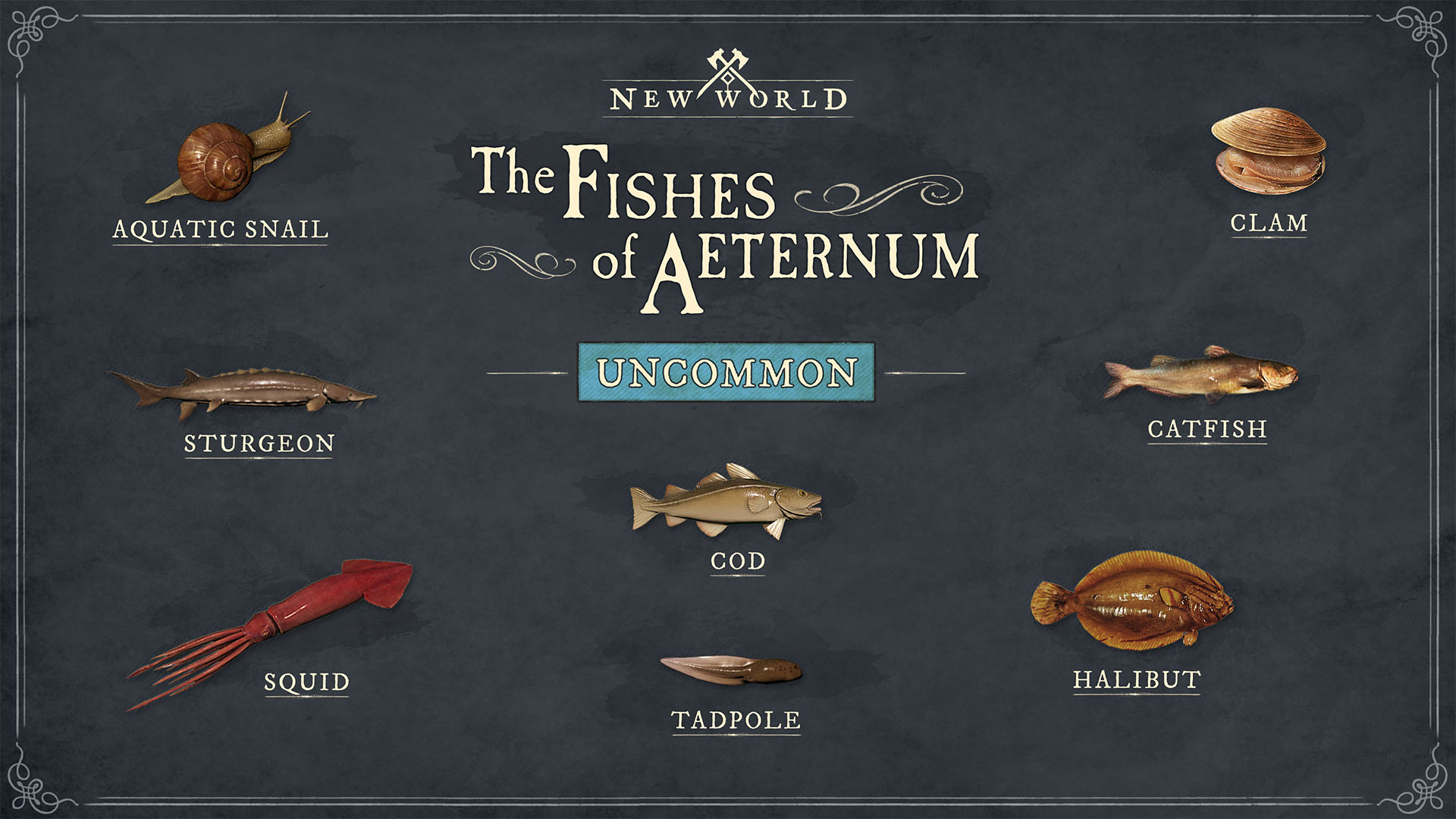 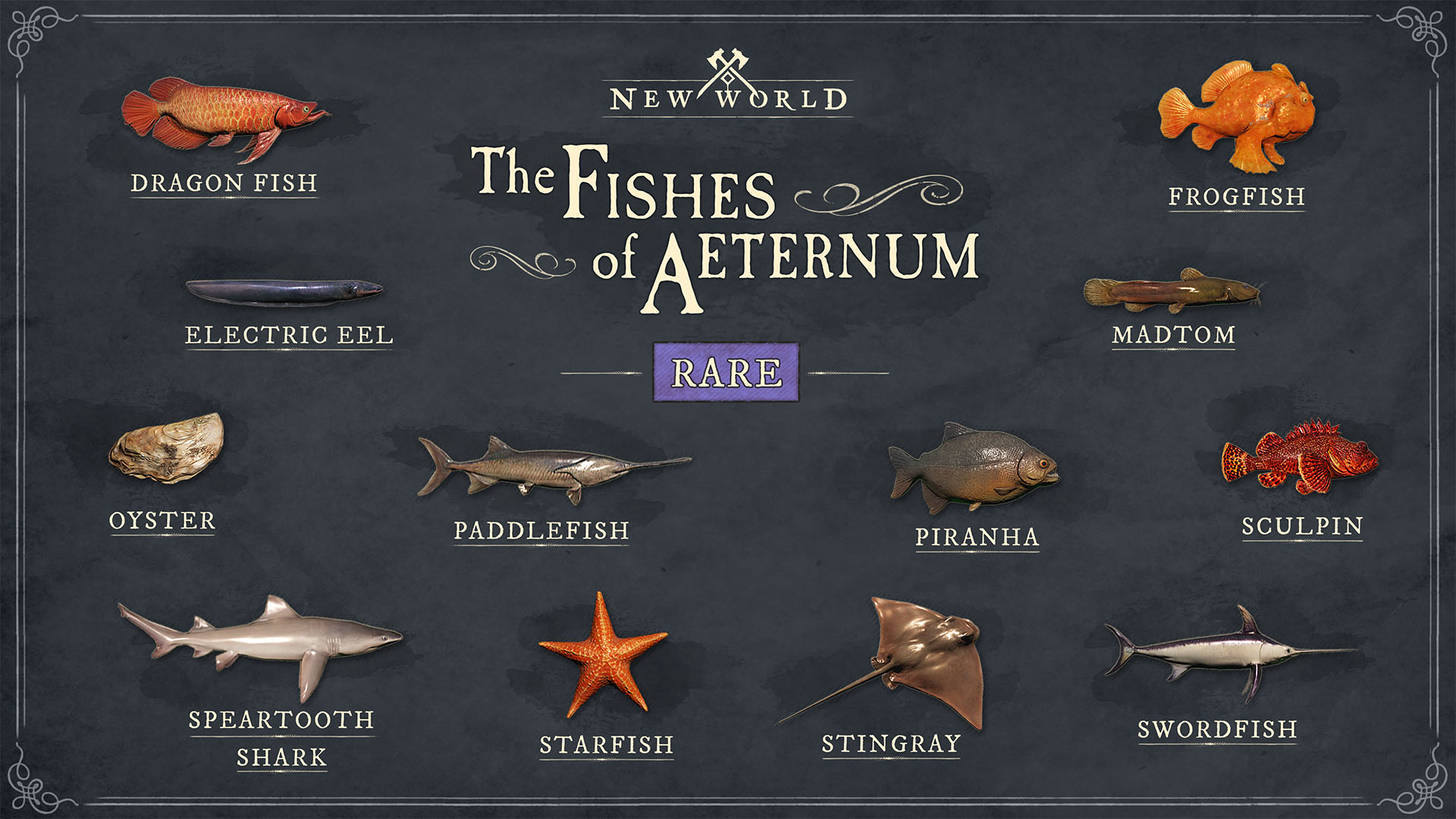 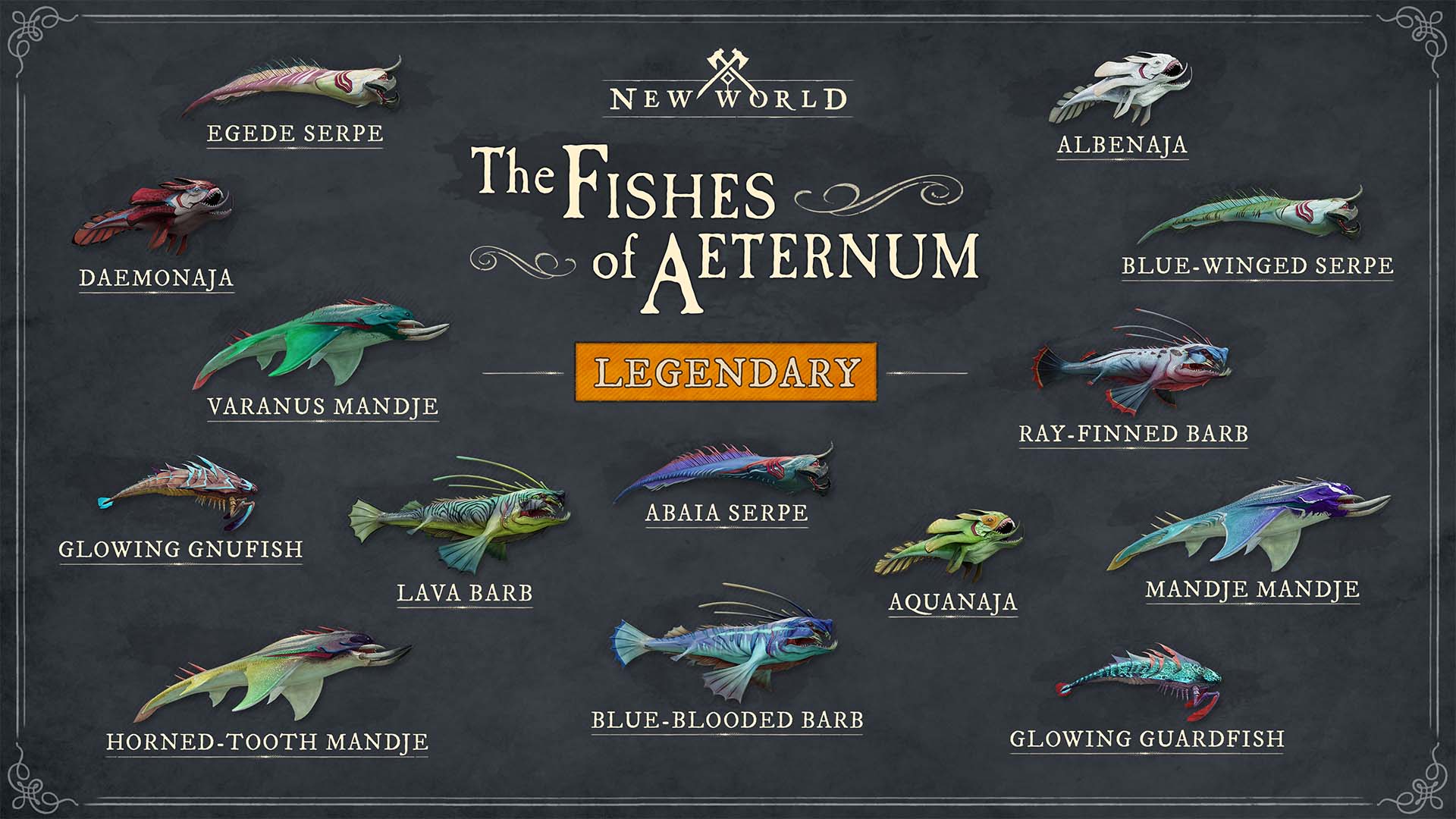