We’re coming closer to the launch of the Platinum Expansion for Farming Simulator 22 on November 15th. We’re not done looking at new features, that are about to be introduced to the series. Did you miss the latest news? Don’t worry, and take some time to catch up:

Today, we want to show you some of the improvements we made in regard to planting and harvesting trees – of course, there are new machines that bring some cool functionality. Check it out! 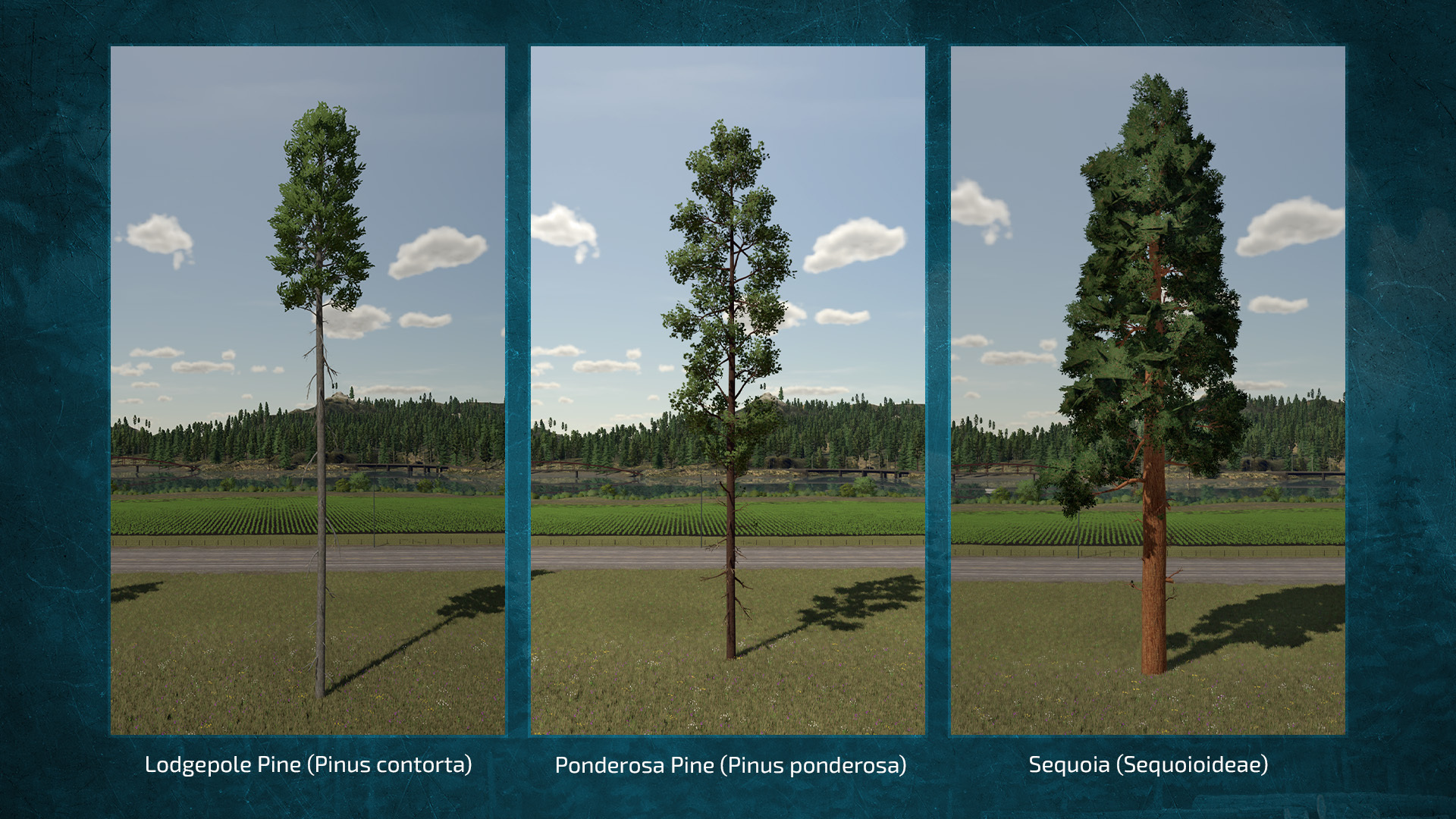 More than 20,000 trees are already planted in Silverrun forest, our new map, when you arrive. Some of them are new to the game: We’re adding more coniferous trees to the existing tree species in Farming Simulator 22.

At the dealership, you find a new, bigger pallet of saplings (240 pieces) that includes the configuration option for the new tree types.

Planting More Trees Than Ever 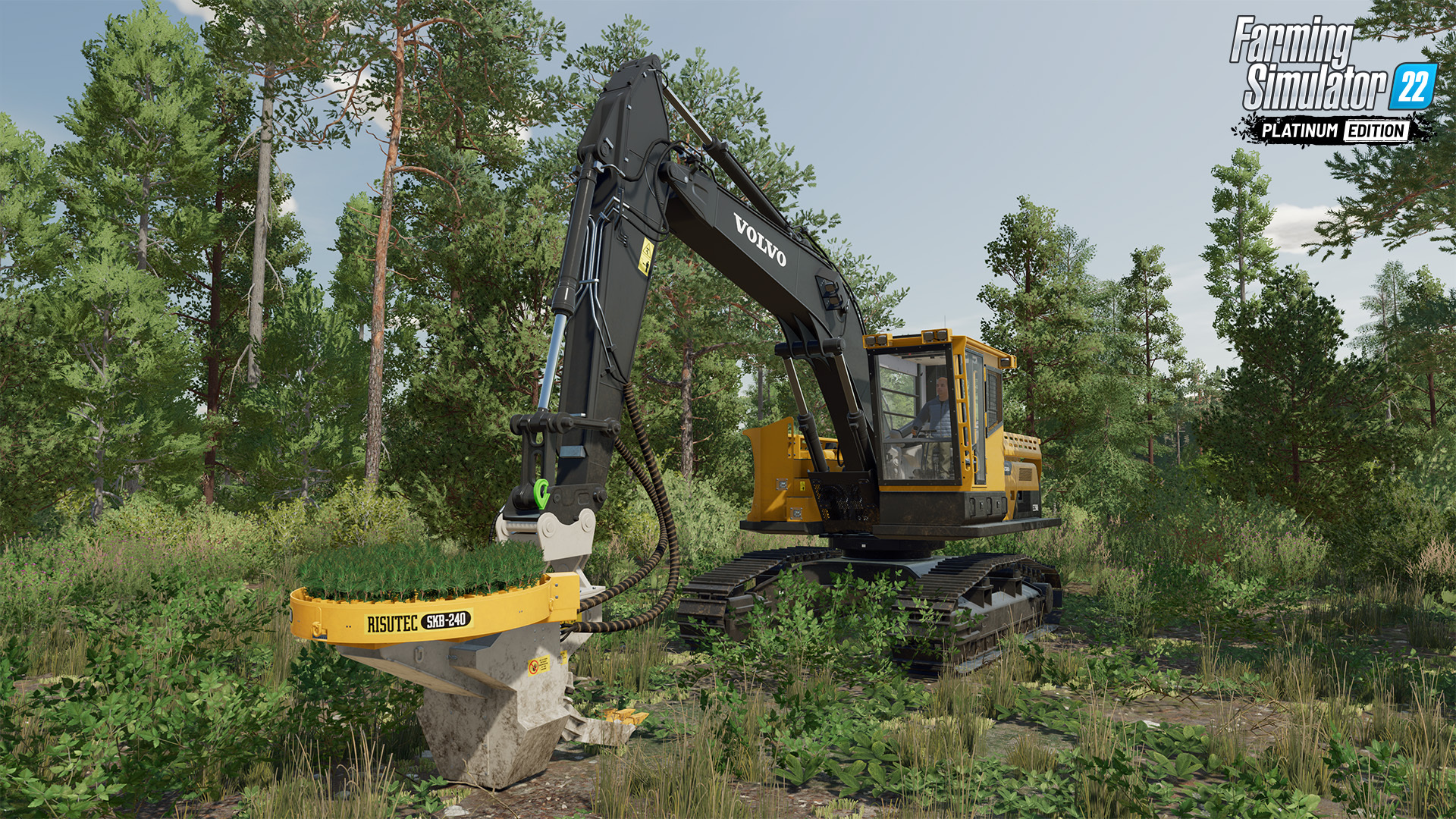 There are multiple machines to use for planting and harvesting trees. More than 40 new vehicles and tools are included in the expansion – featuring John Deere, Komatsu, Pfanzelt, Koller, Schwarzmüller, IMPEX and other brands.

If you want more details about the individual machines, take a look at our Platinum Fact Sheet Collection! We update it every Friday upon release and add more machines with their specifications. Let’s look at planting and harvesting, now. 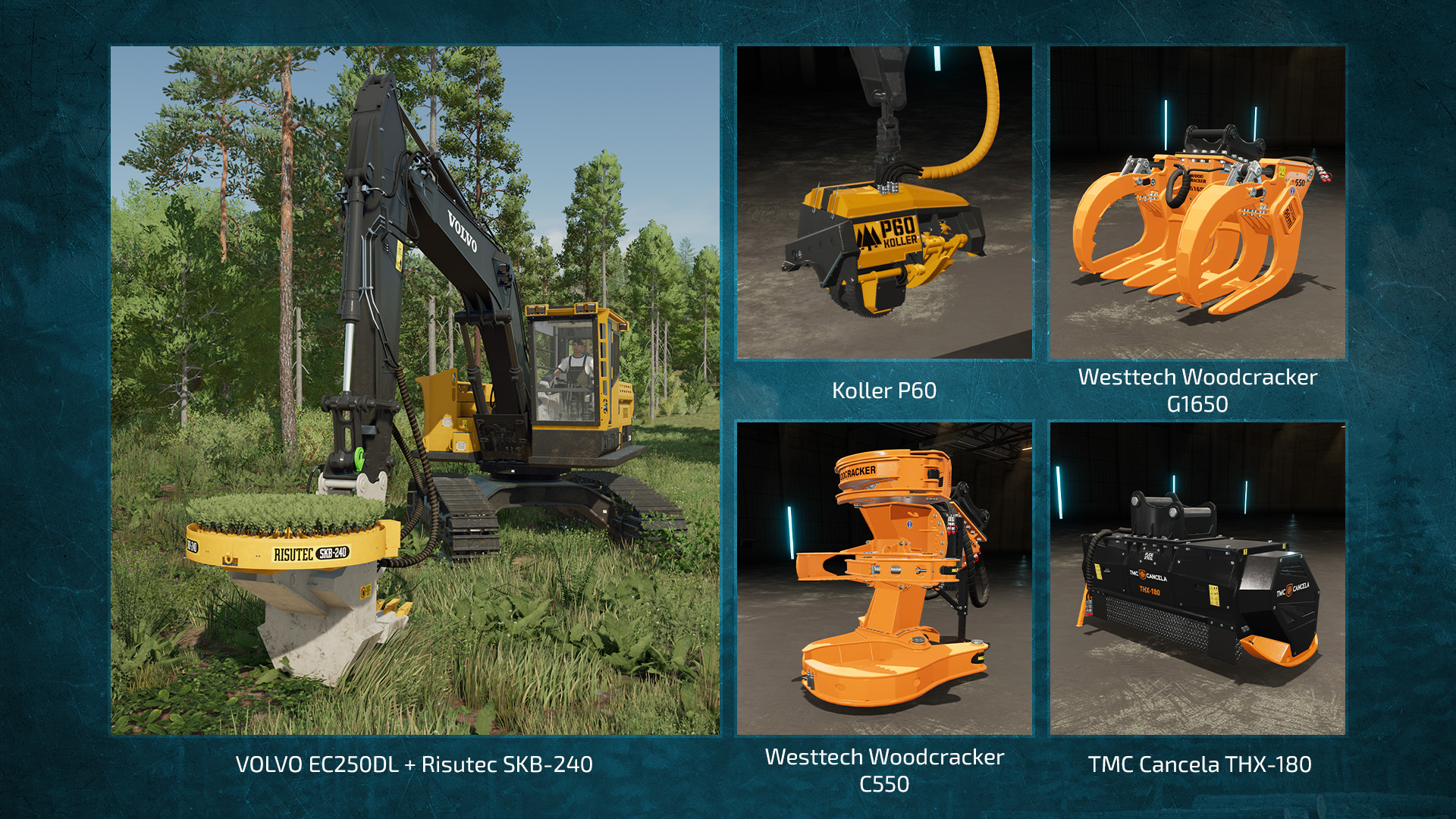 One of the debutants to the series is Volvo Group that bring machines for planting and harvesting with them: the Volvo EC250DL and its big brother, the Volvo EC380DL. Alongside many other machines, of course. Both of them become machines of choice if you want to plant trees like crazy. 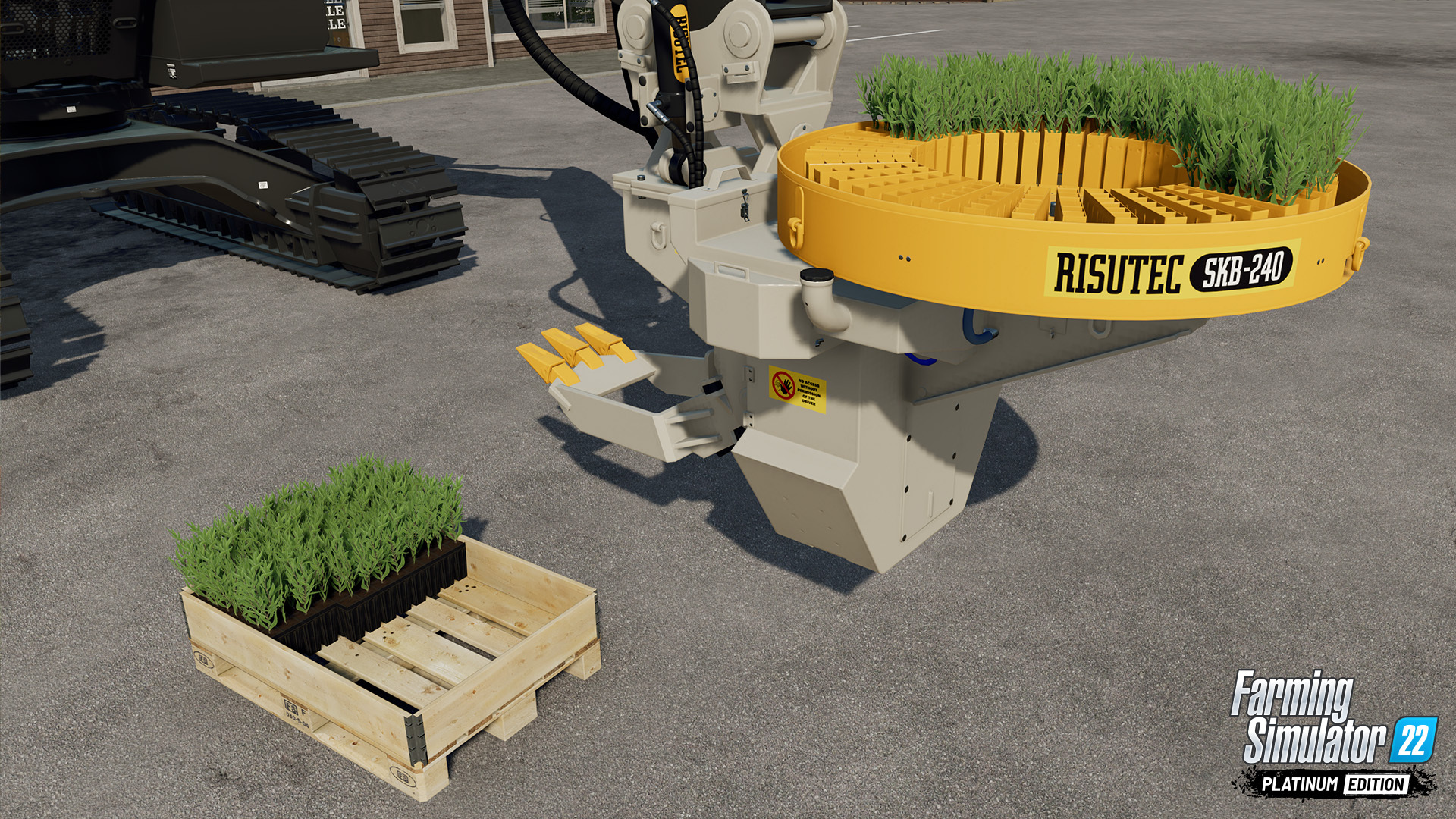 If you’re into planting trees, you’ll like the Risutec SKB-240, too – allowing you to plant no less than 240 saplings in one go in combination with the above-mentioned Volvo machines.

You have to buy the big pallet of saplings that includes the new tree species shown above to fill the tool. Also, it does look cool, doesn’t it?

Time To Harvest Some Trees 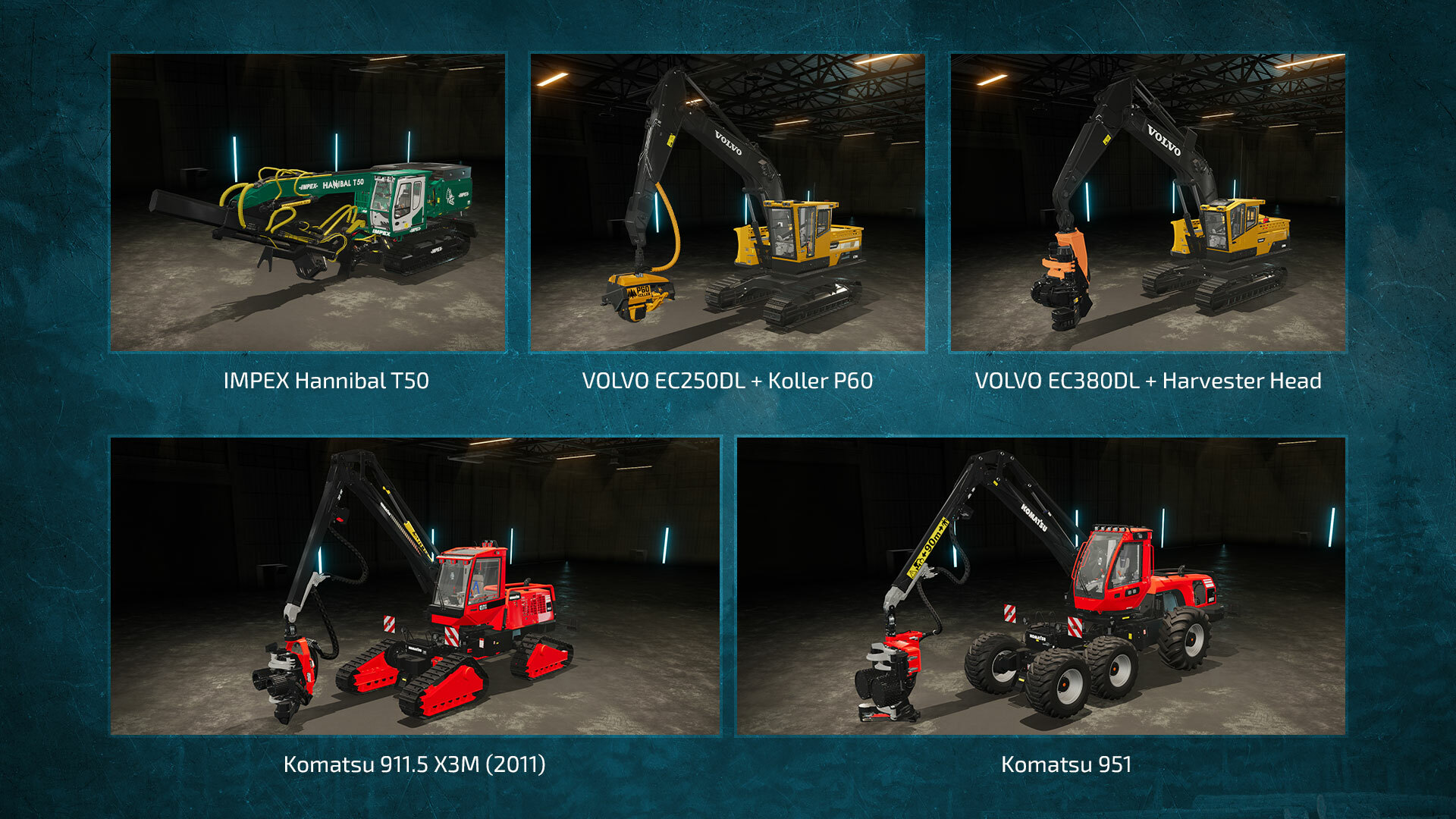 Let’s continue with the new harvesting equipment and take a look at some of the new machines in the category. While the Volvo EC250DL allows you to attach a processor head, the Koller P60, to lop off branches and cut the tree into logs, the EC380DL can be combined with a high-performance harvester head. 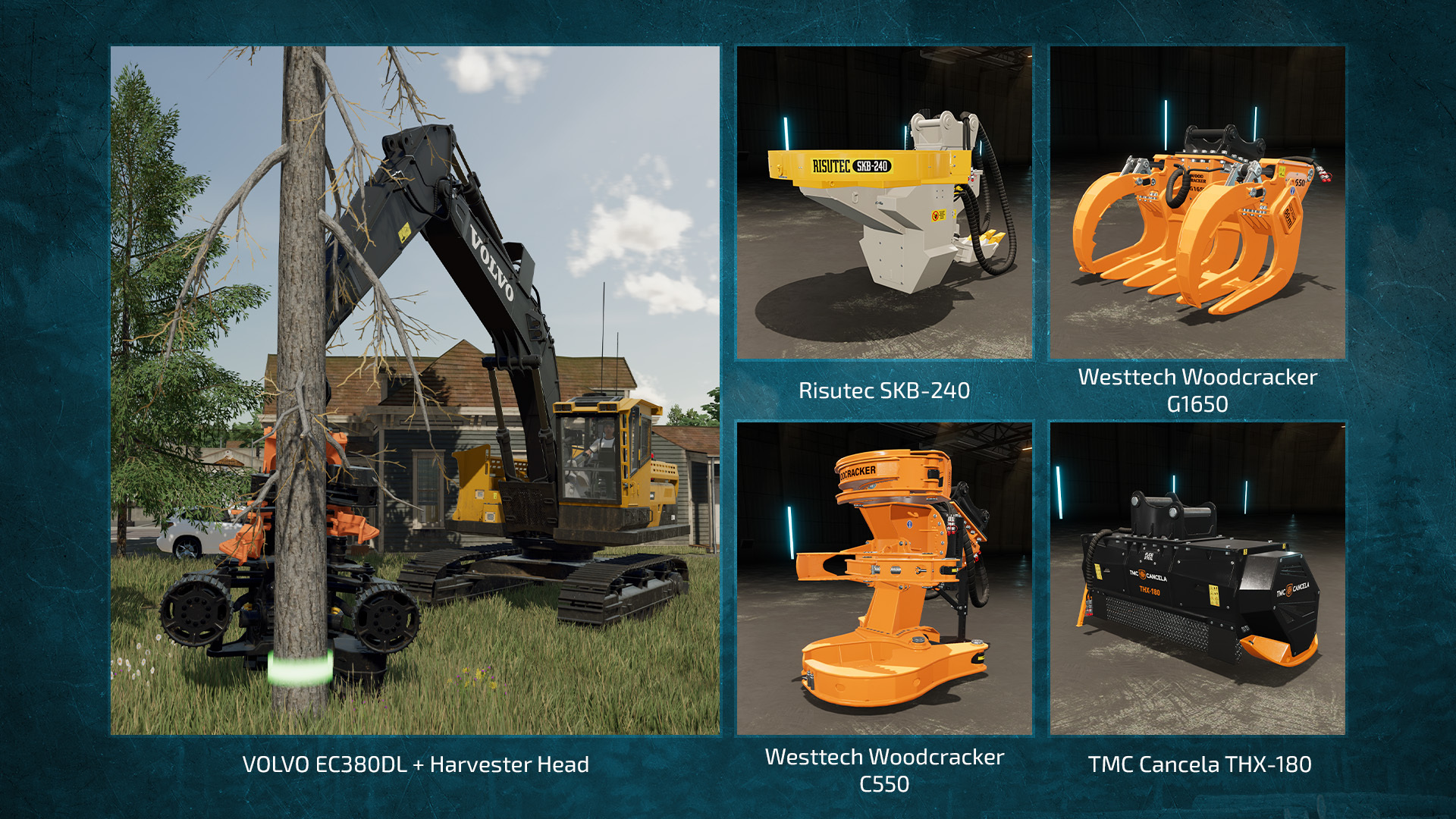 Among many other configurations and attachments, you can also attach a feller buncher to both of them, to harvest and transport multiple logs at once. On top of all those fun playthings, we added some new functionality, too.

See, how flexible the movement of the harvester head is? To make the control of harvester heads a bit more agile, you can now tilt the head of your harvester to not only cut trees but grab them from the ground.

Grabbing a tree automatically is also easier now. A yellow ring appears around the tree stump in immediate proximity, so you always know which tree you are currently aiming at in the dense woods of Silverrun Forest. As soon as it turns green, the harvester is ready for action.

If you want to grab more than one tree – you can. With the John Deere Feller Buncher 843L-II + the FD55 disc saw felling head. Take a look at that beast: 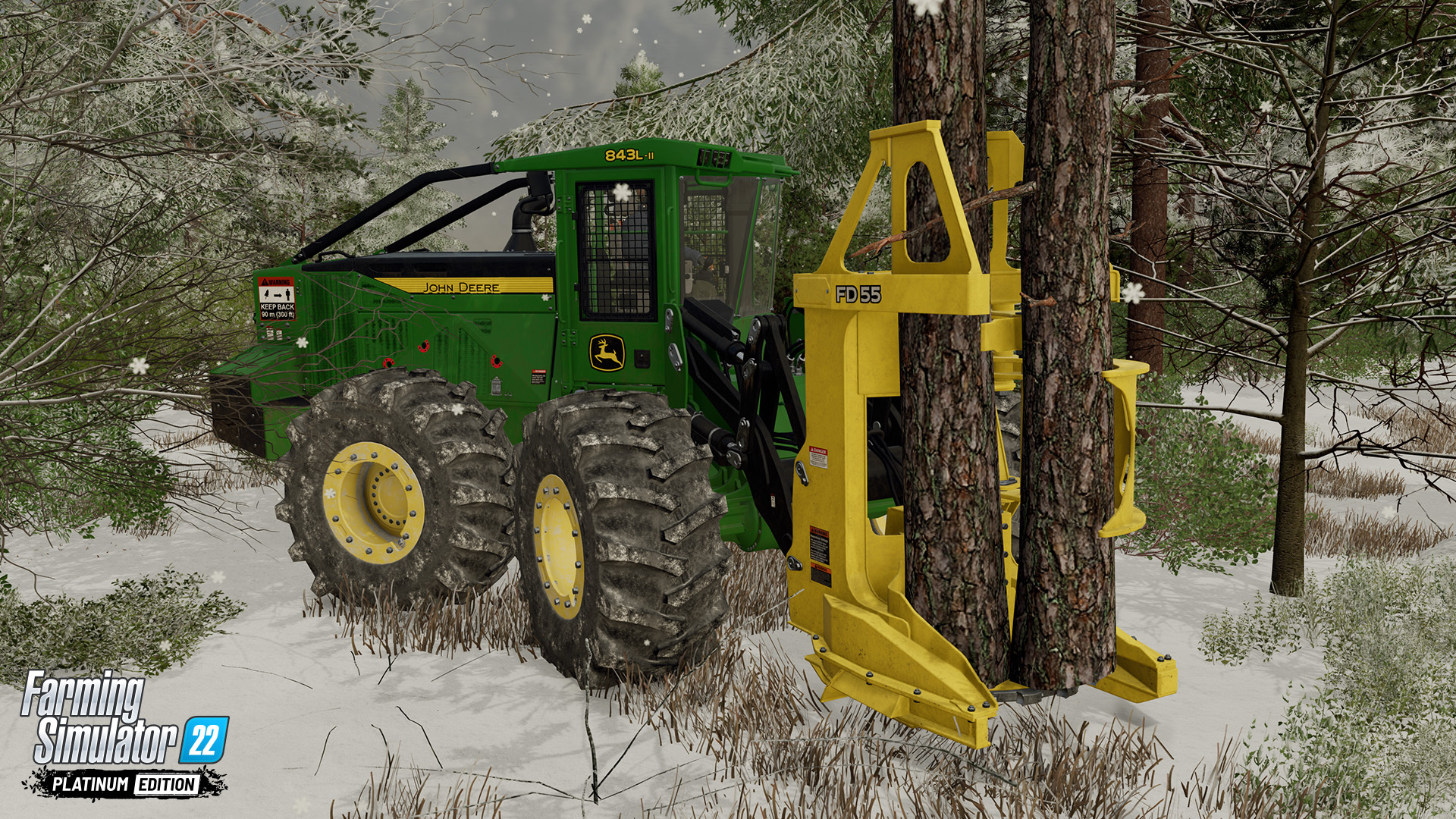 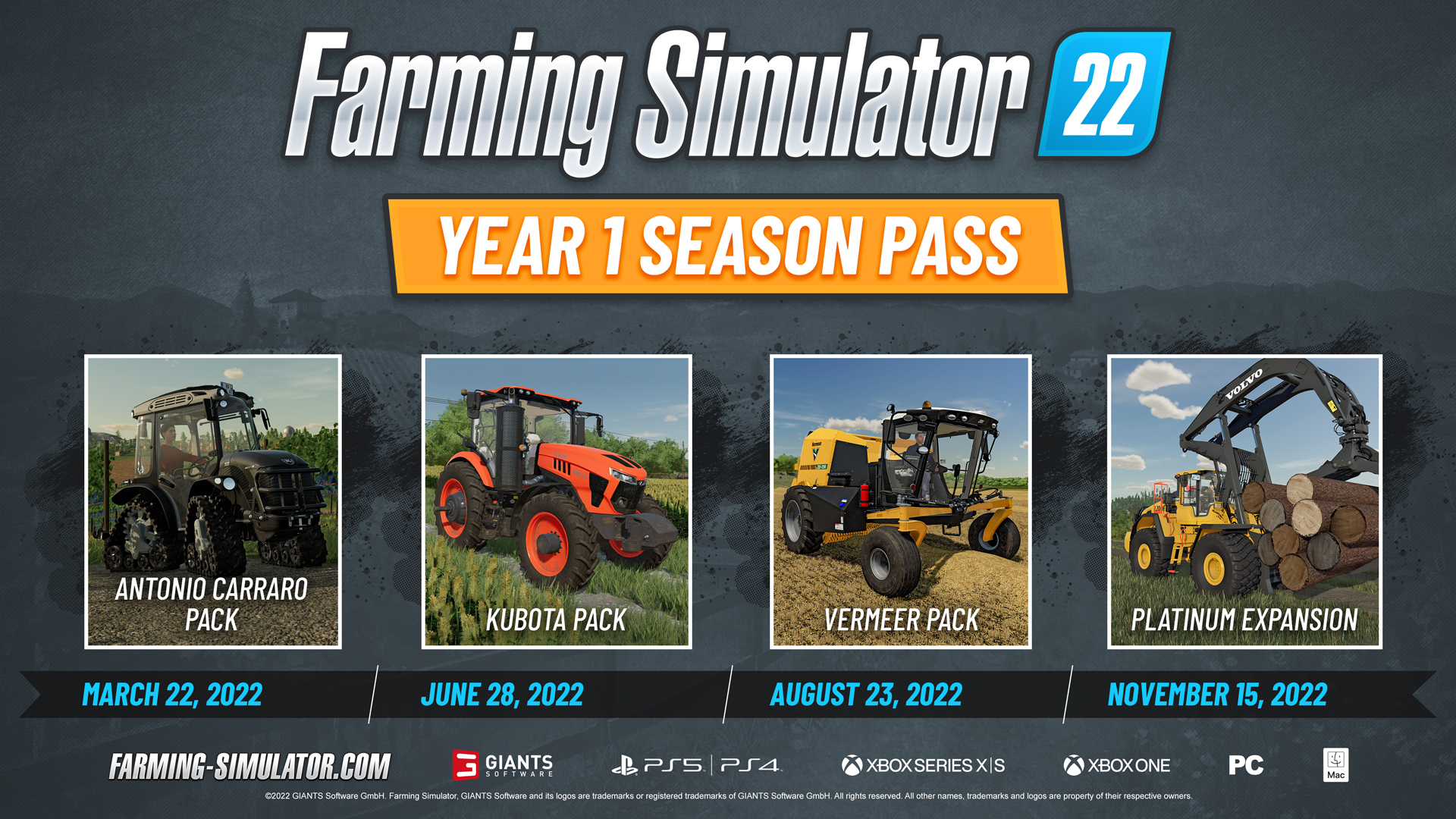 If you want to extend your copy of the game with loads of new content, check out the Season Pass Especially, since you save money compared to buying the packs and the upcoming Platinum expansion separately.